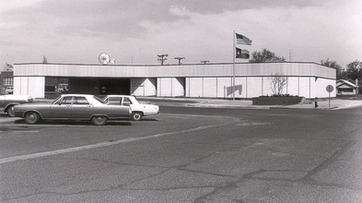 The Deaf Smith County Library began as a few shelves in the storage room in a downtown store. In 1910 it found a new location in a room in the Hereford Bank. Later the 400 volumes found a new home in a small room in the Deaf Smith County Courthouse. Through the benevolence of the citizens of Hereford the collection continued to grow. The collection was in such demand it became necessary to hire someone to act as librarian. Mrs. F.T. Rollson accepted the position for $1.25 a month, which she used to purchase more books.

By 1929 the demands for a formal library lead to a petition calling for the County's financial support. The petitions lead to a special election in which the citizens authorized a special tax to support the library. By 1930 the collection had grown to 2,000 volumes. During the 1930's, our nation fell into a deep depression. As farmer after farmer was denied Ag Loans to continue farming they would walk aimlessly into the library, which was just down the hall from the land office. The librarian noticed one after another staring blindly at a stack of bookshelves. She would visit with them a moment and hand them a book to read. Many farmers would return again and again saying this was the only thing keeping them from loosing their minds. It was during this time the bookmobile would drive all over the county offering books to adults and children at no cost, a signature was all that was required.

In 1973 was the next big move for the Deaf Smith County Library. LSCA funds became available and the citizens of Hereford saw their chance for a new building. In 1974 the new building was completed and the move began. With a line of grocery baskets tied together, the 56,000 volumes were moved across the street to their new home. The Deaf Smith County Library became a member of the Texas Panhandle Library System that same year. Sharing collections and ideas was the primary focus of the Panhandle libraries. Reciprocal Borrowing and Cooperative Collection Development were two of the first programs that brought the panhandle even closer together. The Deaf Smith County Library still has a very extensive needlecraft collection.

By 1986 the Deaf Smith County Library became the seventh member of the Harrington Library Consortium adding 78,000 volumes to the online database. Director Dianne Pierson traveled to Amarillo for training and then came back to Hereford to train the library staff in item inventory. All of us were afraid that we might cause a national catastrophe by hitting the wrong sequence of keys. We had to learn a whole new vocabulary. The TV screen had to be called the monitor. The big box had to be called the PC. We were learning to "log out" before turning the machine off. And we lead the nation in the example of a multi-type wide area network. A universal card was given to all Hereford residents with the instructions that it could be used in most of the Texas Panhandle libraries, giving access to over 1 million items. With three dumb terminals we had entered the Technology age.

In 2000 we survived the new millennium without incident. Over the years, we have seen our roll as keepers of knowledge changing. With 7 public access computers and 60,000 volumes we are ready for the future. E-books, databases and downloadable audios are now being offered to Hereford residents and that is only the beginning.